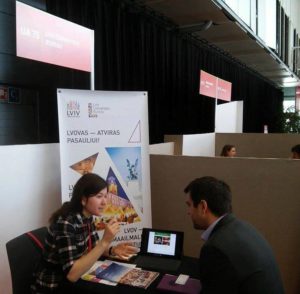 On February 8-9, 2017 Lviv Convention Bureau took part in the annual exhibition CONVENE, held in LITEXPO Centre in Vilnius, Lithuania. According to organizers, the fifth edition of CONVENE proved to be the most successful one yet, and served to reflect a considerable development of the MICE industry of the Baltic Sea Region over the past few years.

The event featured 86 exhibitors and 170 hosted buyers from 32 countries from Europe and Asia. Participants noted the high level of the event organization. One could feel that exhibitors were really motivated and enthusiastic about bringing others to their destinations.

The delegates of Lviv Convention Bureau held more than 50 meetings with hosted buyers from Austria, Germany, France, the UK, Belgium, Denmark, the Netherlands, Poland, and other countries. According to Lina Ostapchuk, Lviv caused a considerable interest as a new destination among international meeting planners. Most of them haven’t heard of it yet.

Participants interested in cooperation received the invitations to ICCA Central European Chapter Summer Meeting, which is going to be held on August 17-19 in Lviv.

As the result of CONVENE, Lviv Convention Bureau is organizing a fam-tour to Lviv in June. Some participants have already purchased tickets to the city. That is evidence of their serious intentions and professional interest.