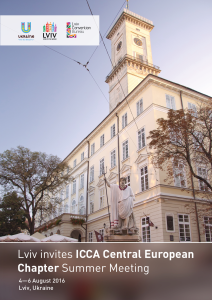 We are glad to announce, that Lviv Convention Bureau has applied to host ICCA Central European Chapter Summer Meeting on 4-6 August, 2016.

ICCA is the International Congress and Convention Association – the global expert in international association meetings. Hosting the ICCA Central European Chapter Summer Meeting in Lviv will contribute significantly to the development of the MICE industry in Lviv. Our appeal is supported by the Mayor of Lviv as well as by Kyiv Convention & Visitors Bureau.

The bidding document includes the description of Lviv infrastructure, its charm and the venue offered. In addition, the overview of current business, economic and political situation as well as current meeting industry situation and plans for future development in Lviv are provided. Preliminary program and budget are also offered for the review of ICCA Committee.

Lviv is growing as a tourism center in Ukraine. It has a great potential for future development. Besides, it is the only Ukrainian city represented in ICCA.

The program of the ICCA Central European Chapter Summer Meeting, despite the formal meetings and sessions, will include various tours, workshops and excursions to special restaurants and museums.

Our team is looking forward to the Election Committee’s decision!