On December 17, 2021, the GALA OF LVIV HONORARY AMBASSADORS took place in the Assembly Hall of the Lviv City Council. Lviv City Mayor Andriy Sadovyy presented awards to 6 newly elected Ambassadors. This year, representetives of scientists and culture joined the Club of Ambassadors. 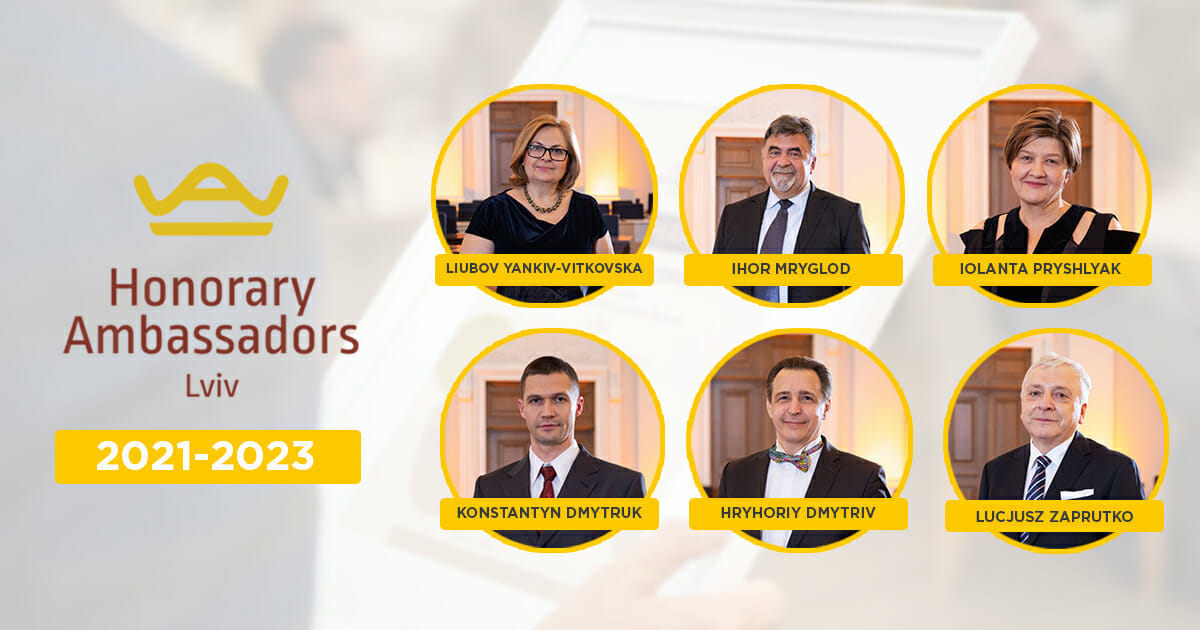 New Lviv Honorary Ambassadors are representatives of the scientific and cultural environment of Lviv, who organize and attract conference educational and musical events to the city. Many unique congresses, forums and festivals take place with their participation. The newly elected Ambassadors are active in their professional field. They often represent Lviv on the national and international arena, act as lecturers and organizers of conference events. They also invite delegations from other countries to the city, are co-organizers of international meetings, exchanges, large concerts, initiators of open lectures with experts in scientific fields, thus positioning Lviv as a conference destination for business events. 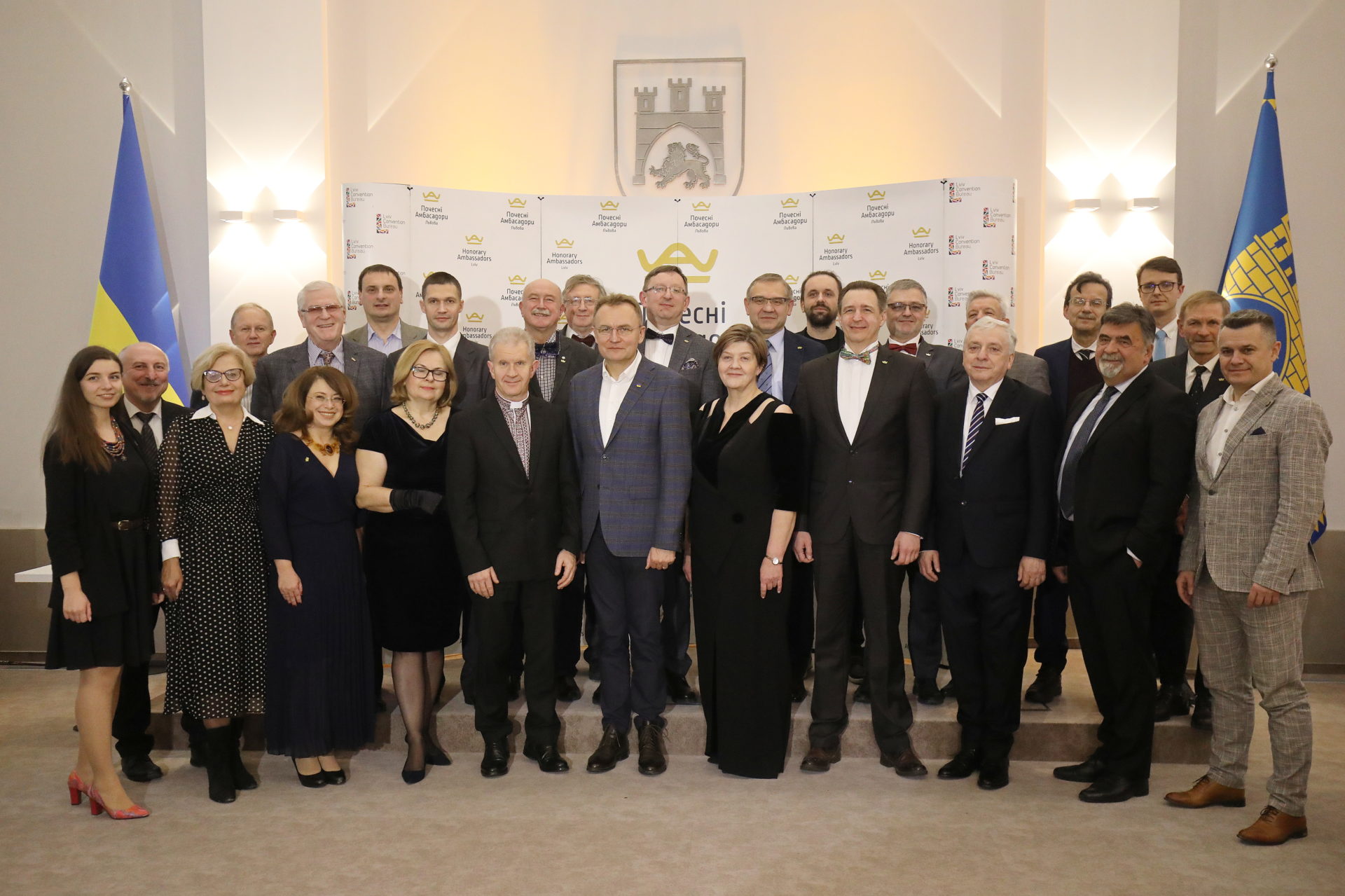 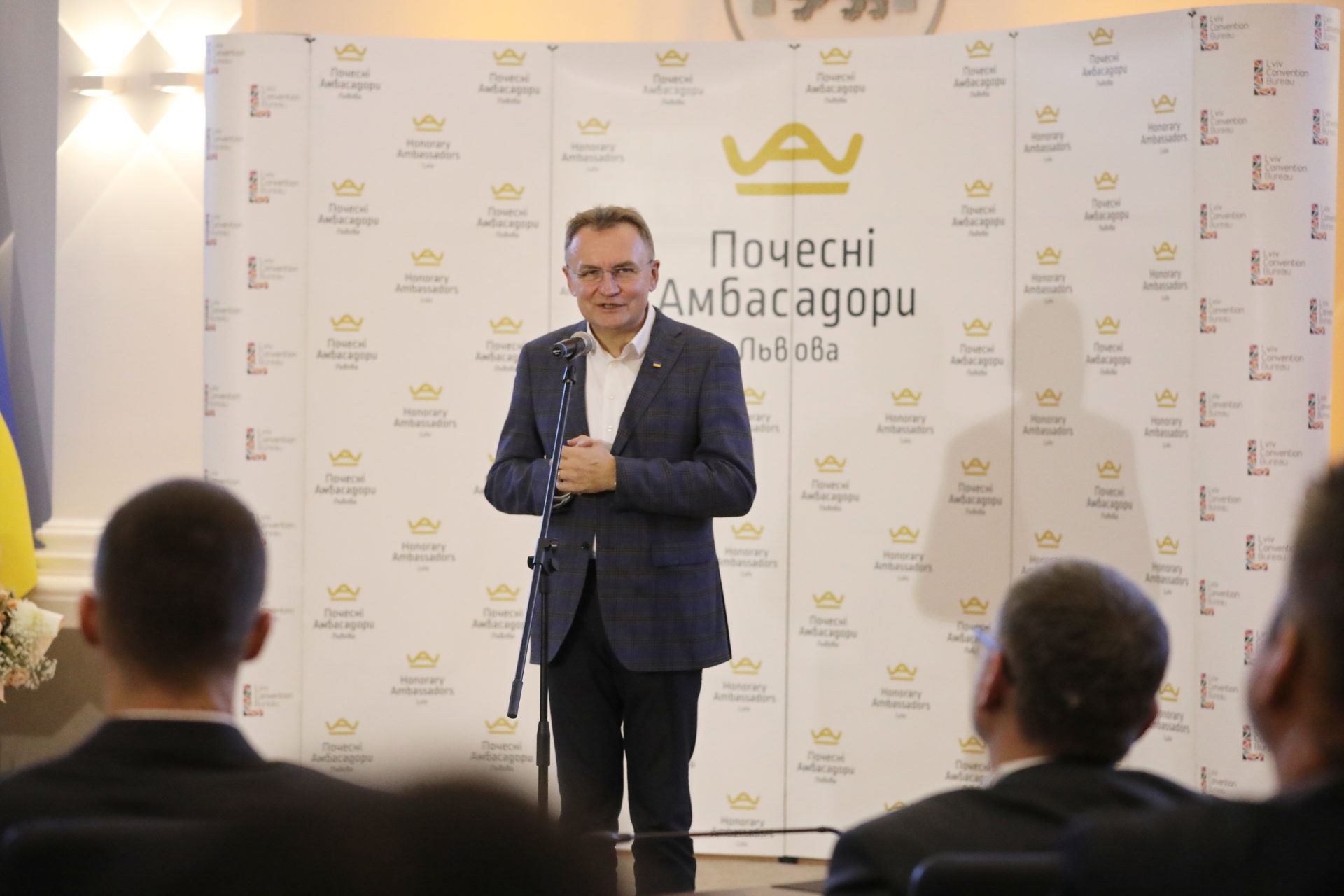 Keynote speaker at Gala was Andriy Pavlyshyn. He is a historian, journalist, translator from Polish and English, a member of the Ukrainian Center of the International PEN Club, and a lecturer at UCU. He is known in particular as a researcher of Polish-Ukrainian relations. One of his last works is the translation of Wojciech Orlinski’s book about the life of Stanislaw Lem. This is not only a biography, but also a detailed, dramatic and honest story about the complex history of Central and Eastern Europe, in which Lviv occupies one of the leading places in the first half of the twentieth century. 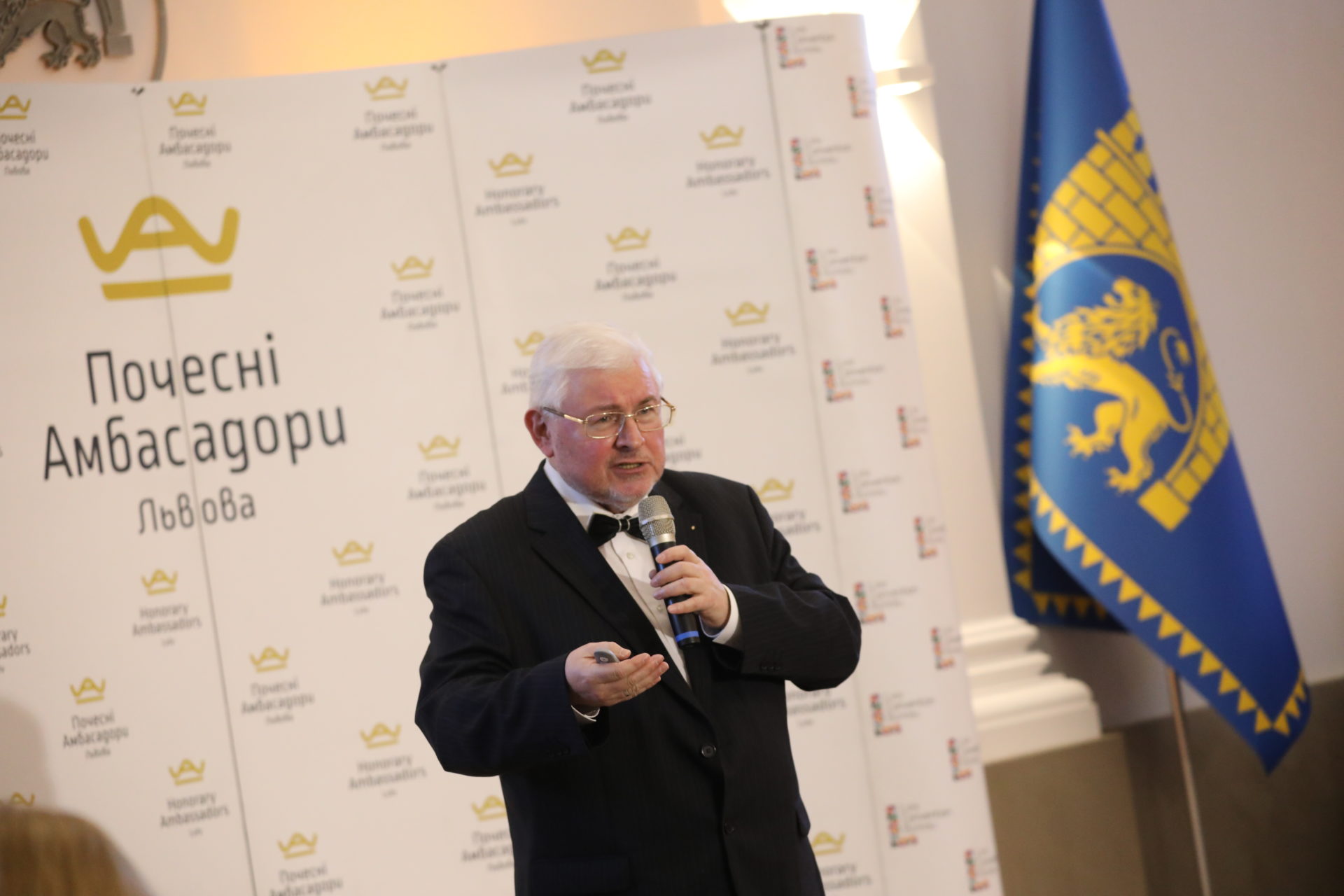 At the ceremony, Andriy Pavlyshyn spoke about the famous futurist, whose 100th birthday has passed since his birthday. He briefly described Lem’s childhood and youth, spoke about the fascination of the science fiction writer with his native Lviv, and also focused on his vision of the future. In his books, Lem wrote about the saw library, which can now be interpreted as 3D printers of things and organs, smartphones. He mentioned the data banks, now called cloud storage. He also foresaw virtual reality and all the nuances associated with it.
For Lviv, the figure of Lem is only fully revealed. But very soon even more events will be dedicated to such an interesting person who remembered the city of Leo with warm memories. In 2022, it is planed to be opened an art space “Lem Station”. The former tram depot will become a unique location for educational and cultural events. In particular, the Futurological Congress has already been planned here.

Traditionally, at the ceremony, the director of Lviv Convention Bureau presented the successes of the Ambassadors Program for 7 years. Thus, the club of Lviv Honorary Ambassadors now has 60 experts from 8 countries around the world, who present Lviv as a place for conference events. During the last year, the bureau team managed to implement 21 projects together with the Ambassadors. In 2021, 12 Ambassadors took part in Support Package Program, which provides funding for conferences. 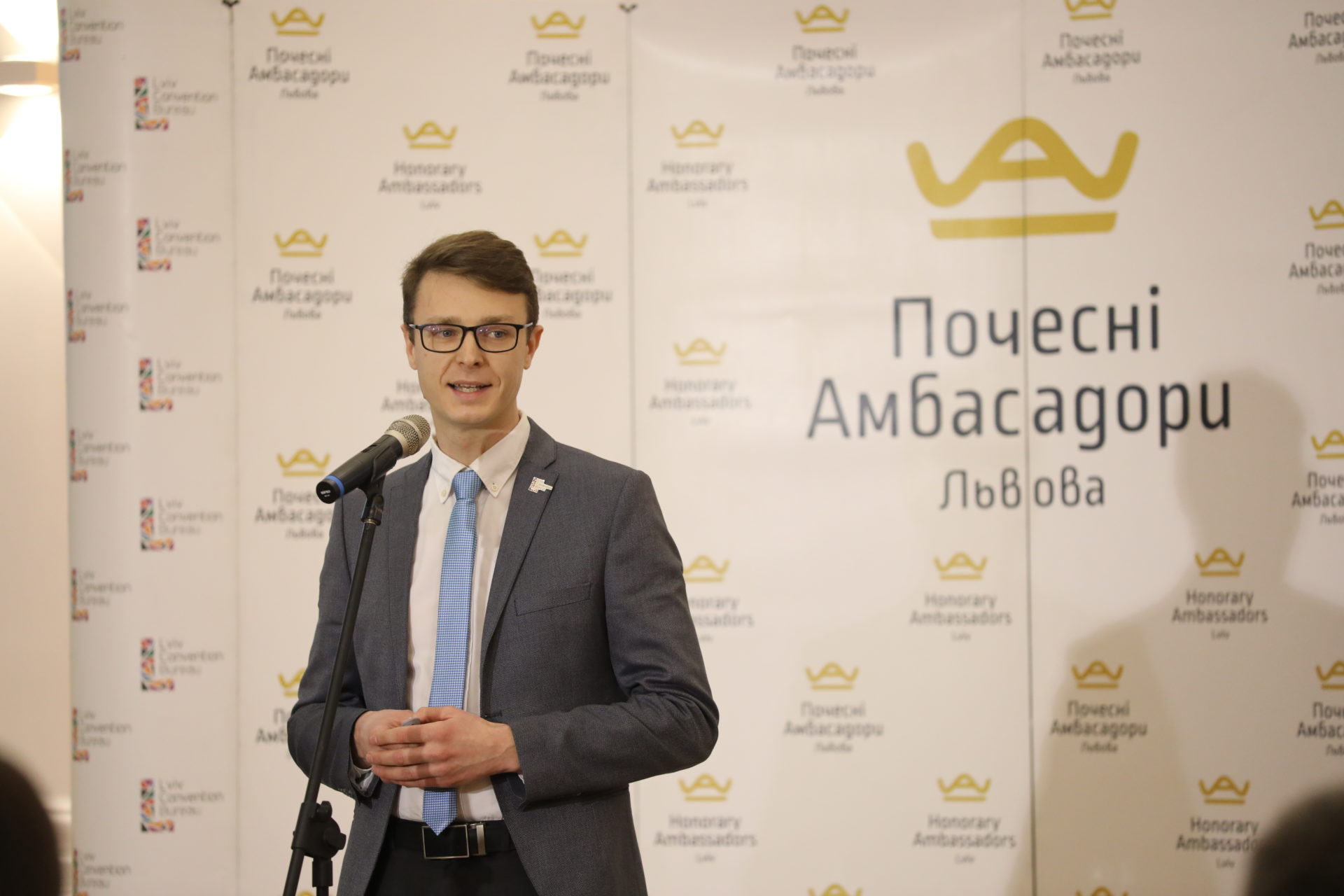 Andriy Pavliv also spoke about the achievements of the Ambassadors, of which there were many in 2021. Lviv Honorary Ambassadors received academic degrees, became heads of various institutions, joined expert councils in their fields, were awarded prizes, received grants, became co-organizers and initiators of major congresses, conferences and forums.
At Gala, the director of the bureau also announced the opening of new conference locations in Lviv, which will be ready to host conference events in 2022 and 2023. You can view the list at the link.

Lviv Convention Bureau is the founder of the Lviv Honorary Ambassadors Program.
Since 2015, team has been coordinating cooperation with Ambassadors elected by a special commission. The team of the bureau helps the Ambassadors to attract and hold conferences in Lviv.

More photos from the event at the link.

You can watch the recorded broadcast here.